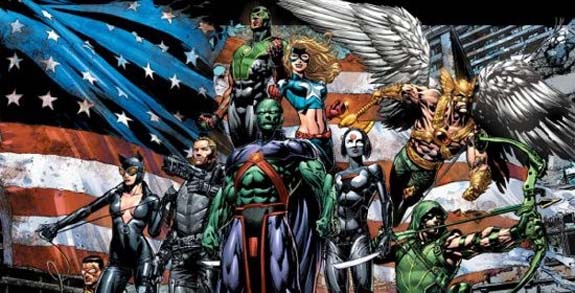 Remember in the 90s when every comic would be released with almost hundreds of variant covers? Some would be shiny, some would be 3D, some would just be black and white. It was a bit crazy to be honest. Crazy and unnecessary, but it was a staple of the business. Variant covers can sometimes be brilliantly thought out, but more often than not, it’s just a boring way of trying to get every more from the comic reading buyer.

That’s all set to change with the release of the new Justice League Of America book (which is different from the Justice League book obviously) as its set to launch with 52, yes 52! covers.

DC has a bit of a wide on about the number 52. Its the number of alternate Earths there are, as well as the number of books that were included in the 2011 reboot. It’s also the number of times that Geoff Johns has turned an ordinary, somewhat boring character, and made it into something really special. The man is a creative powerhouse.

Whats the catch though? Why 52? Because it’s going to be personalised with each and every American state (and Puerto Rico and Washington D.C. as well).

The Justice League brand is one of DC Entertainment’s most formidable and memorable, with TV series, films, as well as another JLA themed book out at the same time. It’s also, sometimes, the benchmark for how group books should be written.

Dan Didio, DC Comics’ co-publisher said these words about the soon to be overhyped launch:

“We’ve done a lot of great things with the ‘New 52, and now we’re putting the focus back on Justice League, with the launch of ‘Justice League of America’. We want to make people realize that this is one of our key franchises, and we plan to build it out not just with the main ‘Justice League’ titles, but other books that tie into them as well.”

So there we have it! Will you be picking up Justice League of America?